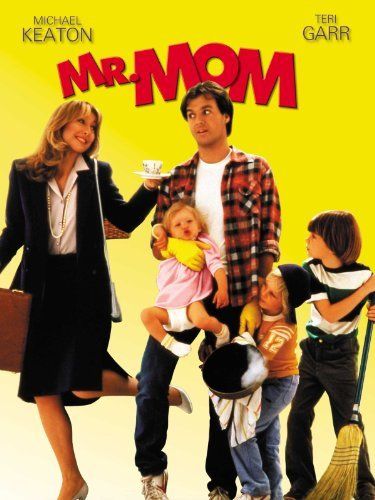 You’ve heard it’s the true-to-life comedy that’s the funniest. It’s so true. I’ve been watching Mr. Mom for the past two nights (it’s gonna take three to get it all watched–what mom has time for movies?), and I can’t stop thinking about a couple scenes in this 1983 movie that hit so close to home.

It’s a movie about a man (Michael Keaton) who swaps jobs with his wife to become the homemaker and primary caregiver of their three children. It’s funny because it shines a light on all the difficult and mundane things moms do daily via the eyes of a man who now has to do them.

There is a series of scenes where Keaton gets depressed, beaten down by the daily routine, and we see him go from clean shaven and svelte to scraggly bearded with some junk in the trunk; his house goes from tidy to turned-upside-down; and his attention goes from his kids and wife to trashy soap operas. “My mind is mush,” he complains to the wife. That’s the result of no adult conversation and watching the same TV shows as your kids. Yep. Feels like this is where I’ve lived recently, minus the soap operas. Instead, I just nap when Sam lets me. (I love the moment when Keaton’s kid tells him his grilled cheese is cold and Keaton simply slaps the sandwich on the ironing board, steams it with the iron for a sec, and hands it back to the kid so he can get back to his show.)

Anyway, it comes to the point where his wife gives him a good talking-to for letting it all go–the house, the kids, himself. Look at yourself! She exclaims, pointing at his newly flabby belly. And the house is a wreck (paraphrase). Basically, she says, get it together, because I did it for eight years, and I understand it’s hard, but I got through it because I had some pride in what I did; I understood that what I did was important. Again, close to home. I recently had a “talking to” by my spouse; more in a moment.

There is another scene where Keaton daydreams he has an affair with the over-sexed neighbor, and his wife walks in with a gun and points it straight at him. “What did it, Jack, hmm?” she asks. “Was it the daily repetition? The boredom? The loneliness?” Now, I’m not close to an affair (never!), but I understand the list: repetition, boredom, loneliness. Add pregnancy to it and a melancholy disposition, and you’ve got some potential problems.

And so I got a talking-to from my beloved husband two nights ago. The house was a wreck and he couldn’t find what he needed, and he couldn’t avoid tripping over some things while looking (we’re still trying to get unpacked/organized is my excuse). I probably looked like a wreck, too. And I don’t think I’d made supper that night. I don’t remember. But I told him to talk to me; tell me what was wrong; if he had a problem with me, I wanted to know.

So he did. He told me some things that really stung. Including, “It seems like you don’t do anything at the house all day.” And, “Somehow, other moms with more kids get more done than you seem to; you need to learn to multitask more.”

In my hubby’s defense, he never volunteers these kinds of criticisms unless provoked. And I provoked him. He was trying to clam up so as not to hurt my feelings, but I made him talk. I had also used Sam’s Sunday nap time to get out of the house and do some rare shopping instead of staying in my daily “work” environment to organize. (In the future, we’ve agreed he can stay silent in the angry moment as long as he agrees to talk to me when he’s cooled down. This honors both his need to stonewall, and my need to communicate.)

Anyway. Those comments, after which I stayed up late to clean house and shower, followed me into the next day and beyond. Is there really something wrong with me beyond the typical Mom burnout? I wondered. Am I defective because I can’t get anything done besides keeping my kid alive and doing the dishes and maybe cooking a meal or three?

I asked Buc that next night, “Is it possible you’re thinking of moms with older [not-so-needy] kids; or moms who have relatives nearby to help, or moms who let their kids watch a lot more TV than I do?”

He conceded that that might be some of it. But the main problem, he said, as he’s often said, is my “perfectionism.” I don’t want to let our kid go without mommy enough. I pick him up [the kid] too much. I give in too much.

Hmmm. I am still pondering this and praying over it. Even though Buc’s words were said in anger, there is usually some truth to angry words. I wish I got more done these days. I wish my house were cleaner, my meals more consistent, my hygiene sparkling. I suppose there are ways to accomplish this.

I also know what Buc doesn’t: I know the inside of my mind, and the physical limits of my body. I feel like I have mental mountains to climb that other people, other personalities, perhaps don’t. I seem happy and serene to most outsiders, but it takes me lots of prayer and meditation sometimes to get to that point. And a man doesn’t know the work of making a baby.

Maybe these are just excuses. Maybe there is some truth to them as well. Either way, I’m glad for my “talking-to,” so I can work at improving, and I’m glad for Mr. Mom so I can laugh at my challenges. One day I will laugh a whole lot more, and even now, I see humor in my day. I’m putting on makeup for my husband when he gets home–and I also made his favorite meal during nap time (no nap for me today…progress!)–but I’m not going to apologize for my stretchy pants, no sir. This is a mom’s life, and I’m learning to embrace it, along with all the humor wrapped up in the job.