Oddly enough, today again I find myself sitting in Mcdonalds, writing. Why would a vegetarian go to Mcdonalds, you ask?

Over the past few months of being homebound, I have discovered that Mcdonalds is actually a nice place to come and write. That’s true, of course, except when you sit down in an empty play area only to have it fill up with screaming kids (which happened to me a few weeks ago.) 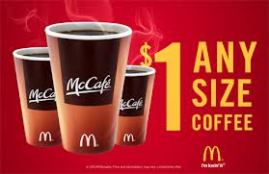 But seriously. At Mcdonald’s, coffee is just a buck, and you get free refills.

And this was a pleasant surprise: Mcdonalds has renovated to make itself more modern and coffee-shop like. A poor man’s Starbucks, really.

Right now, in fact, I’m sitting on a cushy couch-like thing in front of a fake fireplace, with a flat-screen TV just to my upper left. It’s 10:18 a.m., with few people here except for some good-natured seniors in the corner over my right shoulder, smiling over their senior-sized coffees and chatting. (Once I interrupted a high-spirited Bingo game in the Playroom on a Friday. Kindly, the Bingo players let me sit quietly in the corner and blog.)

There are four Mcdonalds relatively close to where I live, so I have rotated among them, trying not to look like that loser who has nothing better to do than go sit solo in the same place day after day. So far I think I’ve remained relatively anonymous. I mean, I don’t go every day. Just when the house feels too empty.

Well, actually, that’s kind of the point. Why would a vegetarian go sit at Mcdonalds, you ask? And why am I drinking coffee, anyway? Health conscious Christian that I am, I’ve tried to quit several times. I was successful for a few weeks in 2010 when I had my heart conversion and found myself cutting out lots of old, icky stuff from my life.

But for the most part, I’ve been a steady drinker for almost ten years, ever since I dropped out of college and entered the most lonely phase of my life.

But what happens when your bad physical habits are a result of bad mental health? Bad emotional health?

As I’ve learned in the past year, all bad behaviors stem from negative beliefs we have developed. Our negative patterns are reactions to negative thoughts and feelings implanted by Satan, the father of lies (see John 8:44), such as I’m alone, I have to protect myself, or I deserve to reward myself.

This is one of two “pillars” in The Hidden Half of the Gospel, the book I’m co-writing with Paul Coneff of Straight 2 the Heart ministries.

And for me, it’s not just some high falutin’ theory. Nope. It’s what my own introspection keeps confirming. Day after day. Mcdonalds visit after Mcdonalds visit.

So I order my Egg McMuffin without meat. So I’m a healthy weight and I exercise pretty regularly.

Is that God’s voice I hear?

Well, maybe someone else said that.

Anyway, I think God understands that recovery is slow. And egg McMuffins are good. Not vegan, but I think He understands: heart health is more than meat or drink.